Here you will find a collection of our reports, good news stories and case studies relating to the LINC Programme.

Our vision for the future of pathology services in Wales.

Updates from the LINC Programme

Key strategies and policies relating to the LINC Programme

Report from the LINC roadshows, held between February and April 2021, and a recording of the Cardiff and Vale University Health Board virtual roadshow.

During 2020-21 the Laboratory Information Network Cymru (LINC) extracted the current state configuration from the present laboratory information management system (LIMS), Trak Care Lab (TCL2016), known as WLIMS1. LINC then led the review and standardisation of this configuration (the future state); more than 20,000 configuration items in total including more than 1,200 test set workflows.

LINC is now working closely with Digital Health and Care Wales (DHCW) Configuration Leads, health board colleagues, and standardisation groups to implement the agreed standardised configuration as far as achievable in WLIMS1. This means synchronising the delivery of the standardised configuration with the service's existing backlog of change requests. A primary goal of this work is to ensure a seamless transition to the new LIMS service currently be customised for Wales.

The LIMS Enabling Programme (LEP) within LINC is responsible for monitoring changes to WLIMS1 that incorporate standardised workflows and ensuring alignment of the change management processes for WLIMS1. Changes to the WLIMS1 configuration are released according to a predetermined release schedule, resulting in a release going live approximately every 12 weeks.

The graph below clearly demonstrates the positive impact this standardisation work is having on WLIMS1 configuration changes. 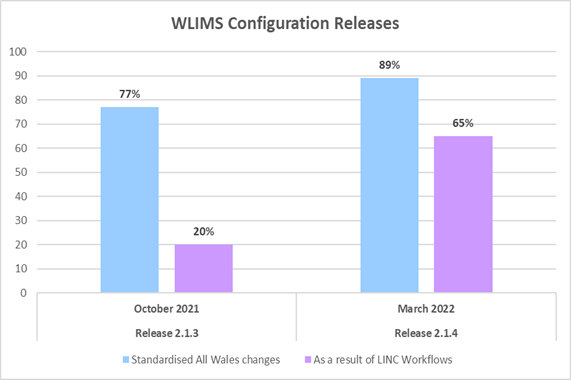 By Release 2.1.4 in March 2022, the numbers had dramatically increased: out of 55 configuration changes 49 (89%) were standardised across Wales, and 32 (65%) of those changes were the result of LINC workflow reviews.

Jodi Hughes, DHCW Clinical Specialist Configuration Lead for Wales, outlines some of the advantages of this standardisation work: “It removes the postcode lottery for patients, it simplifies configuration so that if all health boards do the same then it reduces the clinical risk of mistakes being made in adversely to other health boards, and it also reduces the amount of testing required in laboratories as one health board can test for All Wales.”

WLIMS Configuration Release 2.1.5 is scheduled to go live in early July 2022, and LINC is confident that standardisation levels will continue to increase.

The LIMS will manage over 35 million tests processed by the 21 NHS Wales pathology labs, hospitals, clinics, and GP practices nationwide.

Cardiff and Vale will be the first health board to go live with the service and the aim is to achieve stable operations by September 2023.

The deployment order represents the bulk of the value of the £15.9m contract to future proof pathology services across Wales. This marks the start of the practical development, testing, and validation of the new service and then go live at Cardiff and Vale over the next two years.

LINC Programme Director Judith Bates said “This is a major milestone as it includes the customisation of the Citadel Health LIMS Evolution vLab., accommodating the needs of NHS Wales and the development of the full end-to-end integration, to the national technical platform, national and local pathology systems, and equipment. It will also put in place the hosting of the new LIMS service, associated service and change management."

The new solution has been warmly welcomed by health board chief executives as an example of a patient focused service driven by the pathology clinical community, that will enhance and support the future provision of diagnostic services.

Improvements that the new LIMS will bring include: 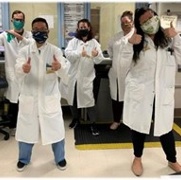 One of the major objectives of the LINC Standardisation and Design Project has been the extraction and documentation of all the configuration items contained within the current WLIMS1 (TrakCare Lab 2016), called the Current State.

This has never been attempted before, so it has not been possible for the service to readily review this configuration since it was first implemented in WLIMS1 nearly 10 years ago. A Current State organisational unit (OU) has also been created in the iPassport electronic quality management system (eQMS) to store all the configuration items.

The Current State Master Catalogue lists all the configuration items, and a dashboard has been developed to track the progress with this work showing 28,000 configuration items covering business intelligence, code tables, core functionality reference ranges and test sets.

Work is also being undertaken to define the configuration of laboratories across Wales (to create a single virtual laboratory), the security model for staff, the Wales Pathology Handbook and specimen numbering.

Documenting the Current State was a very complex and laborious piece of work and has taken two years to complete. The test set workflows are particularly complex and preparing the Current State involved several steps, from extracting and analysing the raw data, and converting into an MS Visio diagram to represent the process in a way that makes sense to a pathologist to review. 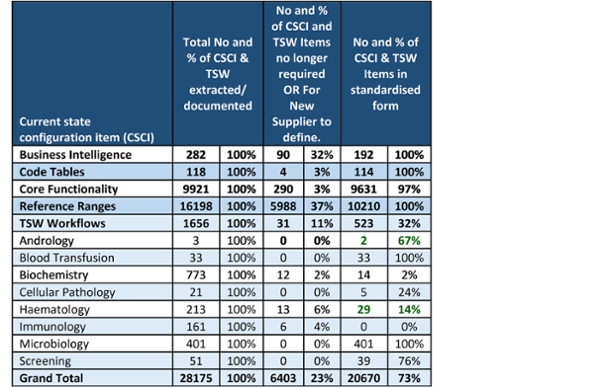 Blood Transfusion, Microbiology and Screening workflows are mostly standardised, leaving 1,256 for the Blood Sciences standardisation leads to review. They are not insignificant and the test set workflow for a full blood count contained 1,737 rules and conditions.

It took 147 pages to document in MS Visio to provide it in a form that the standardisation leads could review and decide which rules were needed (such as age or sex) and which were unnecessary (such as local rules for a specific ward or requesting clinician).

This is an amazing achievement and it has been found that 73% of the Current State is already standardised. Much work still remains to finalise the standardised configuration, or Future State, that will be stored in a separate iPassport OU and made available to the supplier as a basis for configuring the new LIMS Service. Standardisation leads and groups are now reviewing and standardising the test set workflows for the new LIMS Service. Where feasible, these will be implemented in WLIMS1 to make the transition to the new LIMS Service easier to achieve.

The service will need to prepare local services for the proposed changes and address any issues raised up front, supported by business change.

The LINC team has worked in collaboration with colleagues in health boards and trusts via the National DeepSee Development Group, to develop and implement a new Laboratory Information Management System (LIMS) Business Intelligence (BI) system.

The DeepSee2 Dashboards act as an information portal, allowing staff to filter for data relevant to them without the need for complex data querying skills.

Development of the DeepSee2 product was a lengthy process and is the result of a collaboration of nearly 50 Pathology staff across the various health boards and trusts, representatives from InterSystems and DHCW.

The aim of the project was to develop easy to use BI dashboards, with an intuitive design, customisable to meet the current and future needs of the Service. In addition, the platform contains a DeepSee Analyser that allows data scientists and analysts to produce complex queries.

The system is operational and planned further enhancements will provide additional service dashboards including:

"DeepSee 2 offers the same functionality as its predecessor, but in a more convenient, faster and easier to use format. I look forward to working with Phil to develop further Welsh BI tools in the future.” - Arthur Thomas, Betsi Cadwaladr Pathology Performance and IT Manager)

A collaboration across Health Boards has seen a development in monitoring the status of tests received in laboratories. The dashboards illustrate Outstanding Test Lists (OTL) and have been installed in Biochemistry and Haematology Laboratories within Cwm Taf and Hywel Dda health boards in an effort to provide a visual aid to the laboratory staff who process samples.

Most laboratories in Wales rely on manually run reports or an ad-hoc system to monitor their outstanding tests. These OTL dashboards, based on the original model created by Tim Player (Senior Biomedical Scientist, Aneurin Bevan), provide a continually updating, instantly visible set of information drawn from the Laboratory Information Management System (LIMS) that can be fully customised to suit the needs of individual laboratories.

Juber Islam (Pathology Informatics Officer, LINC Programme) has worked closely with Tim Player to develop and enhance the OTL dashboards since October 2020 and now allows the roll-out of this innovative approach into other Health boards and Trusts. The OTL dashboard is a customisable query platform that ensures the correct information is pulled through from the LIMS via Open Database Connectivity (ODBC) connection to the display, and provides a real-time snapshot of the outstanding work flowing through the laboratory in real-time.

Gwyn Bennett (Pathology IT Manager, Hywel Dda) and Roberto Spagna (Biomedical Scientist, Cwm Taf) have been working closely with Juber Islam to define the data needed for their local laboratories they want represented, and this has involved designing the information tabs that laboratory staff will need and gathering feedback on potential improvement from users to further develop this new innovative service.

The intended goal of the OTL Dashboards is that they will save time for laboratory staff by removing the need for manually run reports, provide an easy method of tracking tests to be processed, and to improve the overall turnaround times of tests. In addition, statistics can be produced to measure these benefits and assist audits going forward.

Ongoing work is progressing with Biochemistry and Haematology laboratories in the Prince Charles Hospital and the Royal Glamorgan Hospital who have had the OTL dashboards implemented in March/April of this year. Further development work on improvements and refinements to the current dashboards including additional configuration is progressing at pace. In a few months, the hope is that there will be a demonstrable effect on the turnaround times within the laboratories that will inform further opportunity developments going forward.

Laboratories in Swansea Bay, who have a similar system in place, have indicated interest in having OTL Dashboards implemented. Should the new service prove beneficial to laboratories, it may very well be offered to all Health Boards and Trusts across Wales interested in adopting it.

Findings of our survey to assess staff attitude to standardisation of services and monitor any change in attitude since the original survey in 2019.